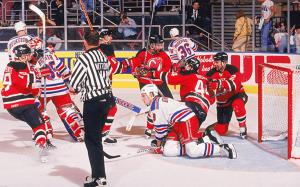 East Rutherford, New Jersey – After bowing out of the playoffs in the second round (in six games against the Presidents’ Trophy winning Washington Capitals), the New Jersey Devils wasted no time in addressing immediate needs with their first significant move of the offseason.

On Saturday afternoon, the Devils made a trade with the rebuilding Pittsburgh Penguins and acquired veteran defenseman Glen Wesley and an experienced goaltender in Ron Tugnutt. In exchange, the Devils sent two-way center Bobby Holik, Bill Berg, and a first round pick in next year’s draft and a second round pick two years from now.

“I really like the additions of Wesley and Tugnutt,” said TSN Analyst Pierre McGuire. “The Devils are still a young and fairly inexperienced team, and it showed in their second round loss against the more experienced Capitals.”

Wesley is known for his play away from the puck and is expected to help improve the Devils’ penalty killing unit, which struggled at times during the season. Tugnutt is expected to share the net with Martin Brodeur, who struggled with fatigue issues throughout the 1995 season.

“We haven’t determined how many games each goalie will get, but it’s fair to say that they’ll both get an opportunity to play a fair amount of games in the upcoming season,” offered head coach Darryl Sutter.

In addition to the traded players, the Devils will be without six familiar faces. Joel Otto and Rollie Melanson both announced their retirements at the conclusion of the season, and Glenn Healy, Chris Terreri, Brian Noonan and Brent Gilchrist are not expected to return, as all of the players will be hitting the free agent market in the upcoming days.

Although the Devils have been mum on what their offseason plans are, Pierre McGuire speculated that more new faces may come internally, from the Devils’ minor league affiliate, the Albany River Rats.

“The Devils have two prospects who are ready to turn pro in Jason Arnott and Ziggy Palffy,” said McGuire. “I believe with Holik gone, that will open up a spot for Arnott to ease in to the lineup in a fourth line roll.”

Palffy, who appeared in four games in 1995, scored his first career goal during his brief call up with the Devils.

“Ziggy showed some flashes of what he’s capable of doing during his brief stint with the big club,” said McGuire. “I think he might see a bigger role and be put on one of the top two scoring units next year.”

Analysts expect the young but resurgent Devils to compete for a playoff spot, but head coach Darryl Sutter has bigger aspirations. “We want home ice advantage in the playoffs, and we are going to shoot for first place in the Patrick Division. Down the stretch, our team proved that it can beat anyone, as long as we stick to our plan.”

That is essentially the Devils’ plan; win the Patrick Division. 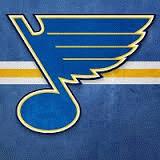 Well another day another bit of news from inside the St. Louis Blues war room. Last night the Blues were eliminated from the playoffs, by the Los Angeles Kings. The Kings defeated the Blues in 6 games. This marks the 4th time in 15 years that the Blues made it to the second round. They have never made it past. But with this season starting out as a wash, at least in the managements mind, has turned into a win for the fans. The team is far better than it has been in years, and the players have changed the managements mind, on the direction that the franchise will be taking. But one must ask, how much damage to the future has this year taken to get, just to the second round?

But if one looks at the future, one will see Jamie Langenbrunner. He should be a shoe in for the Calder Trophy (rookie of the year). But they also have Mike Sillinger, Matthew Barnaby and Craig Conroy, all who played well this year. Coming next season you will see Brendan Morrison, Viktor Kozlov Sergei Berezin, and Jay McKee, all will play at some point in the season. This does look promising for the future of the Blues.

But the last bit of information is that the Blues made a trade. They sent Alexei Gusarov and a 3rd round pick, to the Pittsburgh Penguins. In exchange, the Blues pick up two way left winger, veteran Greg Gilbert and goalie John Vanbiesbrouck. Gilbert will help out with the retirement of Tony McKegney. JVB will be another starting goalie for the Blues. The tandem of Mike Vernon and JVB will, or should give the Blues a very good puck stopping duo. They can push each other and they can spell each other off. But this will leave Darryl Reaugh probably back in the minors, should he resign with the Blues.

That is all from the Strip Club Up the Street. I am Jock Strapp reporting for TSN, St. Louis.